On July 13th, the 16th KPMC preliminary round group drawing was held.  Just like last year, due to covid 19 pandemic, all the matches are done online and there's no opening ceremony. 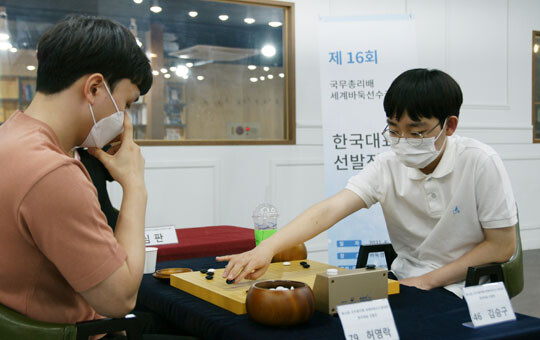 From 11am July 13th, there was preliminary round drawing at Mullae-dong "All That Mind" baduk stadium.  Also, the host of sub events (pair-baduk / 10-secs baduk) drew the participating players' attention, and the drawing for sub events was done at the same time.  The 16th KPMC drawing's result can be checked at the official KBF Youtube channel and KPMC's official website.

KPMC preliminary round is held as double-elimination, and the champion is determined by round of 32 tournament.  The top seed is applied per each group based on the results from the 1st KPMC to the 15th KPMC.

This year's KPMC Korea Representative has been replaced to Kim Seung Gu (15).  On June 21st, there were domestic selection matches for the 16th KPMC, and the winner was "Heo Young Rak", but he recently became a professional baduk player, so the qualification was passed to the second place winner "Kim Seung Gu".

For this year's 16th KPMC, commentaries will be done by many places such as Europe Twitch TV, professional baduk players' Youtube Channels in English and Korean.  They can be watched as LIVE via Youtube and Twitch TV.

Since the first 2006 KPMC, KPMC is the biggest international world Baduk Amateur competition.  For this year, total of 64 Representative players are participating.  Korea had the biggest number of championship records until 15th KPMC (total: 7), but recently China is winning the championship 6 years in a row making a tie with Korea.